Given my predilection towards video games, there is a natural tendency for me to try and turn everything in my life into some sort of game. For The Thesis, this is no different, and a lot of parallels can be drawn between research and particular gaming genres, most notably epic role-playing adventures. Here, I address some of these parallels and attempt to show how gaming experience can teach valuable lessons for academic research; some serious, some silly.

Most notably, research is often described as a ‘quest’; usually by some lone hero who is trying to shine ‘light’ into ‘dark’ corners previously not traversed by man/orc/elf, or to seek some golden treasure (‘knowledge’) that others have yet to attain. Comparisons between PhD study and video gaming, then, naturally lend themselves toward the world of Role-Playing Games (RPGs); particularly the sort of epic scale, fantastical journeys portrayed by the likes of the Elder Scrolls, Legend of Zelda and Final Fantasy serieseses. Think about it: a young, unknown adventurer heads off to various unexplored climes to meet a plethora of challenges head-on before battling some sort of final ‘boss’ (the thesis examiner) to return back to his village with the spoils (his or her doctorate). I’d say that that sounds fairly familiar to anyone who’s gone through the PhD process, and there are other parallels that can be made with the acquisition of new skills or the levelling up of key stats. From this perspective, it’s certainly a lot easier to deal with the daily grind of research when you think of it as an XP+ (experience)-gaining exercise than a ‘job’; furthermore, it’s even mildly satisfying to pretend that a little ‘+50 XP’ notification comes up in the corner of your screen every time you fix a bug in your code, analyse a particular piece of useful data or get a journal paper accepted.

However, where RPGs can represent a epic quest from obscurity to world-saving greatness, they can equally imply a long, time-weathered slog  through dark, dank dungeons filled with tough, armoured beasties; something that’s not too alien to the experiences of most PhD process. Doing a PhD is hard; like, Water Temple hard. Typically, a lone hero must struggle through wave upon wave of gnarly, heavily-armed enemies in order to save the world/rescue princess/defeat evil overlord [* delete as applicable], which is easily comparable to the loneliness of the long-distance researcher battling against wave upon wave of research struggles. Largely, the main RPG/PhD protagonist is dropped (largely unprepared) into a new, fully-formed world and told to fend for yourself with little in the way of guidance and usually only a minimal tutorial: this is much like the progression of a grad student from being a bog standard research student into someone whose skills hold up on their own. If my PhD experience has been anything to go by, this is a perfect metaphor for the life of a new grad student dropped into the floodwaters of academic research without armbands or a life vest, where you must learn your own skills, navigate your own research path and figure out by yourself how you’re going to conquer Mount Thesis with only a wooden sword and shield. 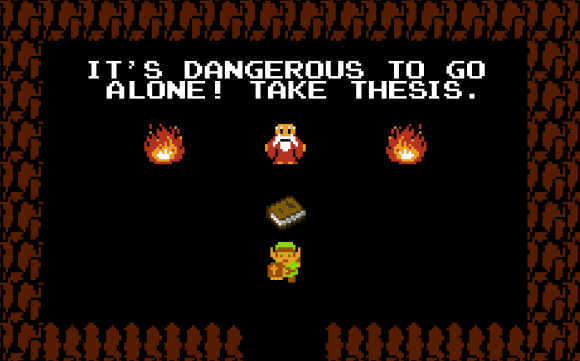 Much like epic-scale RPGs, a PhD also offers plenty of scope for distraction. Sure, the main quest may be to finish this piece of research so you can write it up in this chapter of your thesis and then hand it in, but along the way it’s easy to find other things to do to kill time. Research typically has a plethora of side-quests dished out by random Non-Playable Characters (NPCs) and townsfolk, as well as other missions that deviate time away from your thesis but ultimately earn you bonus XP and strengthen your skills. These might be:

– Sucking up to your supervisor by marking undergrad assignments [+15 XP]

Whilst video games might be thought of as a distraction or evil time-sinks, there’s certainly a plethora of research skills that can be gained by engaging in { certain types } of video game. An open-world, (potentially) story-based quest provides a significant opportunity for exploring a complex, expansive world and can teach very worthwhile skills in adventuring into the unknown and metistically scouring dungeons for loot/treasure; a direct allegory to painstakingly reviewing academic literature and investigating infinite paths until you finally stumble across one which isn’t a dead end. Such adventuring can also teach patience, and impart an ability to take time over your search and to be curious enough to poke your nose into every nook and cranny; persevering in the face of adversity (and/or ragequit) to eventually finding that well-hidden chest containing a magical sword that kills everything with one swing; infinite amounts of some special cake that never makes you fat; and some experimental/simulation results that aren’t complete tosh and might actually be worth publishing.

So yes, in many ways, embarking on a PhD shares much similarity with booting up a new video game RPG for the first time; the awareness of the impending time-burden painfully bright. There’s excitement and fear in equal measure at the challenge(s) that will thrown whimsically at you from every direction, and an anticipation of what it’ll feel like to be a fully-trained, battle-hardened adventurer once you’ve beaten the final boss (your final thesis examiner); but all in the knowledge that it’ll be long, rocky road that will take significant mental and physical energy to overcome. All this withstanding, everyone must start out with their simple wooden sword and shield, and elevate themselves to the role of ‘Hero of Time‘ by traversing many Water Temples and by battling many Skulltulas; it’s not an easy quest.

But where the Triforce of The Legend of Zelda fame unites ‘Power’, ‘Wisdom’ and ‘Courage’, in the case of a PhD [project slash thesis], there are three far more fundamental aspects which define the True Hero, and which must be bonded together in perfect harmony to once again bring balance to the world: ‘Hard Work’, ‘Coffee’ and ‘Crying’.

It’s a long, hard road, but we’ll all get there in the end. Godspeed!