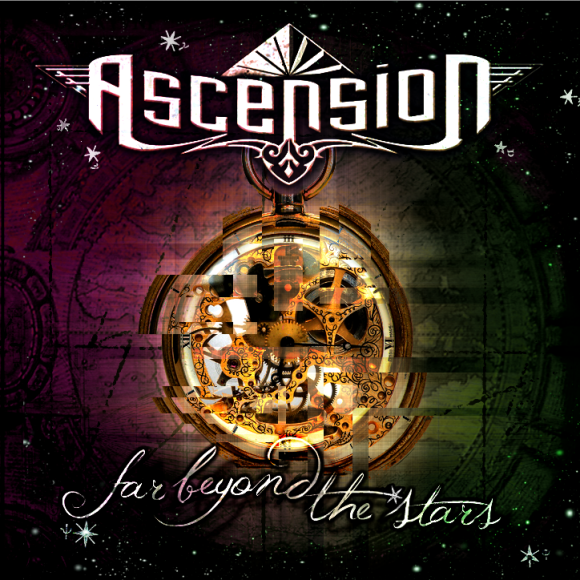 It’s been an interesting rise to fame by Scottish power-metallers, Ascension. Still but youngsters in the spectrum of rock’n’roll, their first release was the Moongate EP deployed in 2009, before that was followed up by second EP Alchemy the following year. Honed, then, by continual touring and recording (most notably a UK tour with Axenstar at the end of 2011), the band retreated to Sonic Train Studios in Sweden with Grammy-nominated producer and King Diamond player, Andy La Rocque (Falconer, Dragonland, Evergrey) to record their debut full-length album, Far Beyond the Stars. Was it worth the wait? Oh, you bet. 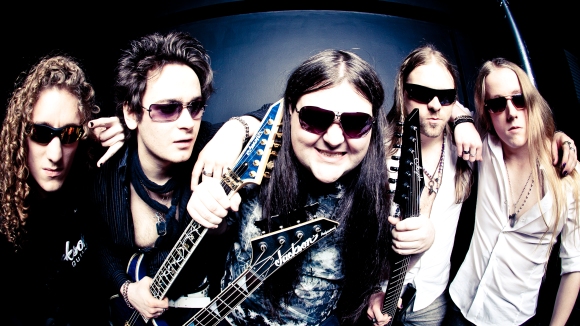 Ascension represent a  rare species: A band that have the ability to produce genre-leading music straight out of the box. Dodgy first few albums? Forget it; Far Beyond the Stars shows that perfectly-formed metal can shine through on a debut record to compete with some of the genre’s leading lights who’ve been at it for years. With an exciting, explosive and fresh perspective on a genre that (arguably) hasn’t moved on for a decade, the time is ripe for an enthusiastic young band to take it by the scruff of the neck, throw it around and demonstrate that there’s life in the old dog yet. Far Beyond the Stars harks back to some of the greats: Imagine an early DragonForce infused with Bruce Dickinson’s vocal power; Stratovarius with renewed juvenility; HammerFall without the bombast. A debut album filled with the kind of songwriting and lyricism that you’d expect from rock’n’roll stalwarts is humbly thrust forward with the sort of power that demands you sit up and take notice. Not only is the songwriting top-notch, but there’s a staggering ability to play showcased here, too – The classy guitar work from Stuart Docherty and Fraser Edwards exhibition the kind of dual-shredding silliness that Sam Totman and Herman Li manage to pull off in DragonForce, but played with such confidence and craft. These aren’t songs hastily bashed together to form a record to flog at concerts, this is a full-blown release and you can feel the craft that’s gone into moulding each and every one of the tracks: Songs have been lovingly curated until they’re almost perfect in scope, full of delicious hooks and sweet melodies that reel you in to listen again and again.

Vocalist Richard Carnie is a powerful driving force fronting the band, laying down an impressive vocal range that bolsters the impressive spectrum of themes that the intelligent lyrics portray. On galloping rockers like album opener ‘Somewhere Back in Time’ (video link here, or see the video embedded below), Ricki’s voice is infused with thunder and brimstone, plumbing high notes and low with ease and fortifying a track that is less a ‘song’ and more a charging monster. Sometimes, it acts as the rhythm itself while Messrs Docherty & Edwards explore the frets in whirligig guitar solos, while at others it’s a solo instrument in itself. ‘Heavenly’ is a truly superb song from beginning to end, linking up a ridiculously catchy chorus with a barrage of pounding rhythm guitars, melodic shredding and powerfully symphonic solos from both vocals and guitars, and comparable to some of the best melodic/power metal that’s alive today. Even when the pace wanders into slower territories, as it does on ‘The Silver Tide’, the combination of classical guitar backing, orchestral strings/keys and some impressive vocals, the quality never drops. There’s genuine emotion being poured out, too, so in between all the songs about fantasy and other-worldliness, there’s striking passion. Choruses are a high point all across the board, each managing to display an impressive level of hook while simultaneously blasting out a barrage some of the most thunderous melodic metal that’s as catchy as it is powerful: We can’t stop here, this is earworm country.

The two real treats are the instrumental rocker ‘Orb of the Moons’ (featuring guest keyboards from Elias Holmlid of Dragonland) and the ten-minute progressive epic, ‘The Avatar’, both of which show off some true writing class and will sound absolutely phenomenal in a live show setting. Here, the combination of solid writing, enthusiasm, spirit and ability align to truly make Far Beyond the Stars interstellar; and it’s wonderful to be along for the ride. There’s something that feels so ‘honed’ all over this release, topped off with some fine quality production, but at the same time so ‘fresh’; not just fresh, but thoroughly refreshing. Certainly, it marks a palate-cleanser from the hordes of churned-out, fantasy-tinged metal and a perfect antidote to the current music tastes of the masses. Ascension keep things interesting to the end, managing to build up a staggering head of steam early on that remains throughout the middle of the album, before being bolstered and escalated by ‘The Avatar’ and the final track, ‘Time for War’. And wrapping it all up is that wonderful album cover art (see top of post), by guitarist Docherty, that cocoons a wonderfully crafted debut album into a killer package. There’s some intense talent on show here, and the only qualifier to a superb debut album is that, at least on the basis of what’s to be heard on Far Beyond the Stars, one can only expect even more from the band in the future. More power (metal) to them, I say. [9]

2 thoughts on “Sinister Reviews: Ascension – Far Beyond the Stars”