Further to my previous update (Science & Engineering Day 2013), last Thursday presented the Astronautics Research Groups’ second event in in National Science and Engineering Week (NSEW) 2013, with the arrival of the Big Bang Solent science fair to the Garden Court at the University of Southampton. This post documents the major goings-on of the day, what we can do to improve for next time, and also to share a few photos from our activities and exhibits. So, without further ado, onwards! 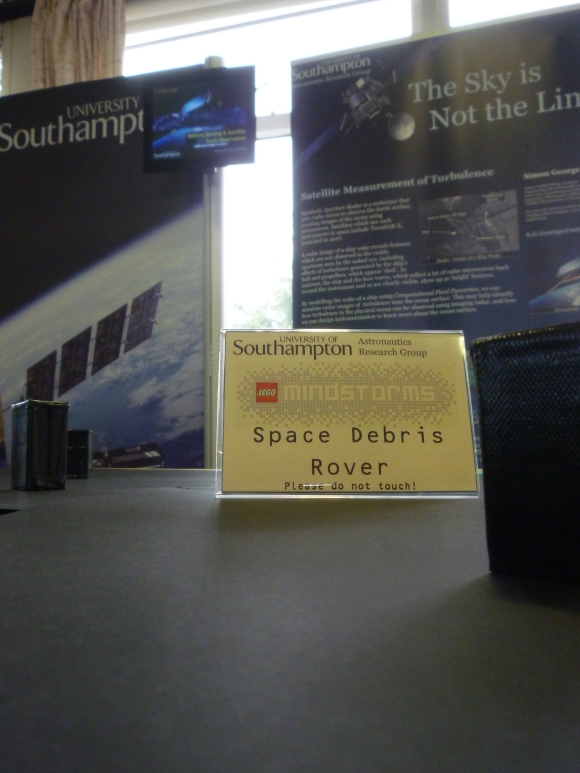 Our stand and presenting team (Ben [spaceman_ben] and I, plus a few other stragglers) were once again out in full force at a brisk 0845 on Thursday morning  to put our stand and kit together; smugly earlier than most of the other stands exhibiting that day, leaving us plenty of time to soak up the free coffee and biscuits and to gently rib the other delegations who’d scheduled considerably less time to sort out their kit. Our setup was largely the same as for the previous Saturday, albeit with a few modifications to our LEGO Mindstorms demonstration, resulting in the substitution of Aquabot with a new, space-debris themed rover, Debrisbot: 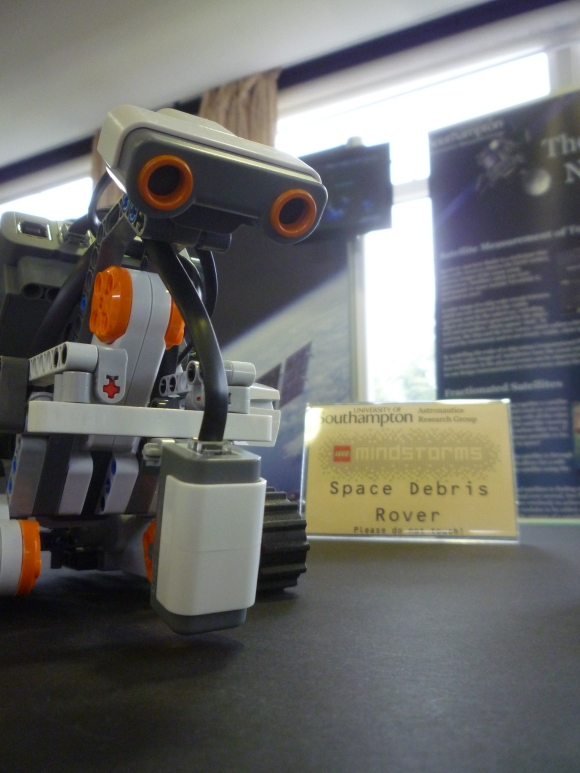 Saturday’s headaches were largely derived from the fact that Aquabot‘s mission of collecting coloured balls into its jaws provided unexpected sources of unpredictability: for example, our demonstrations of placing balls in Aquabot‘s path meant that visiting children were inclined to try picking up the balls and rolling them (sometimes with great force) into the rover’s maw. This was fine, except when it happened just as Aquabot approached the edge of the ‘green’ area, such that a ball would get stuck under the NXT colour sensor when the rover reached the  green card and hence would not detect that it was imminently going to crash into the makeshift (albeit perhaps with one less ‘f’) cardboard wall we constructed to make sure balls did not roll everywhere. In addition, we hadn’t accounted for the fact that children would ‘lean’ on the cardboard wall and bend it completely out of shape, meaning that its ability to contain both Aquabot and the coloured balls to the table area was severely impaired.

Given these points, it’s not only a miracle that we did not have balls rolling loose all over Building 85 but that we actually managed to get to the end of the day without any of our balls inadvertently going home in children’s pockets (or worse, mouths) for a permanent holiday away from the University. So, to remedy these, we decided to get rid of both the balls and the cardboard wall – by eliminating the other functionalities of the NXT colour sensor aside from the ‘am I near the edge of the table?’ detection using the green card, we could reinstate our previously-abandoned ‘is there object in the way?’ detection function using the NXT ultrasonic sensor to make the rover recognise any solid objects that we placed in its path (which we couldn’t use before because it kept detecting the balls themselves and tried to avoid them rather than trying to collect them). So with that, Aquabot was gracefully retired and replaced with Debrisbot; a rover programmed to sense nearby objects (which we assumed were nearby space debris fragments) and perform “collision-avoidance” manoeuvres to avoid impact. And in most senses, Debrisbot worked pretty well.

Not brilliantly well, though. There were still quite a lot of issues arising due to the NXT ultrasonic sensor’s narrow field-of-view meaning that there would be an object to the left- or right-side of the sensor that wouldn’t be detected; or other cases where there was too little energy being reflected back to the sensor (where it was sometimes absorbed by the object, or reflected in a different direction), and the the rover didn’t detect object properly and would drive into it anyway. The idea was for Debrisbot to be roving around, avoiding bits of junk as necessary, but sometimes it would just clatter into it anyway, or turn around and get objects stuck under the tracks; doing ungainly pirouettes and wheelies before falling over like a boss.

So, an executive decision was made to transform Debrisbot from a debris-avoiding rover into a debris-sweeping rover; charging around the ‘black’ area, pushing the ‘junk’ objects into the ‘green’ zone like a giant space snowplough. And with that, a significantly greater level of success was observed, as within minutes, all of the bits of ‘junk’ (made from Tic Tac boxes stuck together and wrapped in black duct tape) would be pushed to the edge, leaving the black region of ‘space’ safe for satellite operations. Debrisbot was essentially just driving around in straight lines until it encountered the edge of the ‘green’ (and hence wasn’t aiming for objects at all, just ploughing them if they happened to be in the way) so it would be even better if Debrisbot was able to ‘look around’ for bits of junk and then explicitly move towards them, but that’s a larger task for another time. For the moment, though, Debrisbot demonstrated pretty much what we wanted it to in a nicely simple way and leaves plenty of room for improvement. Not bad, little buddy. 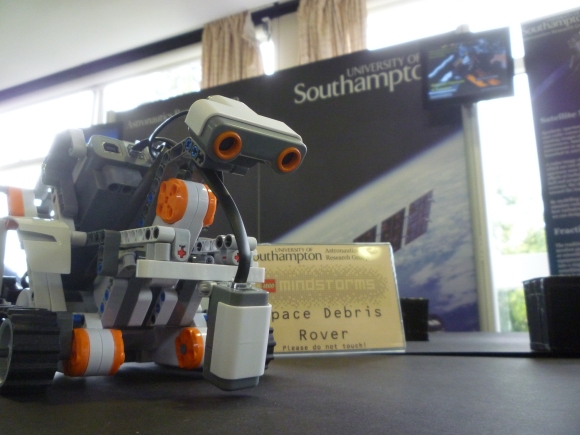 The event itself was pretty enjoyable – essentially an event to get schoolchildren interested in doing science and engineering, and involved around 600 children from the nearby area visiting for the day to do some fun, science-based activities, talk to people in college/academia/industry [delete as applicable] who ‘do’ science and stuff for a living and to get an idea about future careers and stuff.

Our main drive for exhibiting was to demonstrate our research activities and show the youngsters that activities in ‘space’ are happening here in the UK, and to prod them towards taking up such work in their future education, if they want to. It was also interesting to find out how many young people are aware of the  space debris problem, and to ask them for ideas about how we could go about resolving it: while Debrisbot was hardly the most efficient (or successful) method of demonstrating how a space debris sweeper system might work, it did the job and (I hope) gave the visiting public a new perspective of the space debris problem and the ‘sort of thing’ that could be done to manage it.

Anyway, an enjoyable day: the Space Junker stuff went down pretty well as usual, with some visiting students managing some staggeringly high scores, and we certainly gave out of a lot of our ‘Space Systems Engineering’ worksheets which contain information on our research, details of how to access Space Junker online, and also a few puzzles and stuff. So, to round off the event and, indeed, this post, here are a few of my other photographs from the day: we’re not sure when we’ll be taking Aquabot/Debrisbot out on the road again, but I’m sure he won’t be in the garage for too long. Hooray!

EDIT – Our activities were recently published as a blog post from LEGO Education UK! You can find it here: http://legoeducationuk.wordpress.com/2013/03/27/space-research-with-a-little-help-from-lego-mindstorms/