A couple of weeks ago, I signed and submitted a form which officially says that: “I, <author>, intend to submit a full PhD thesis for examination within the next two months.”

Yup, I’m officially on the path to submission. I can’t say that I’m not ABSOLUTELY TERRIFIED by this sudden turn of events, but I suppose that it was inevitable that at some point I was going to have to hand in something vaguely thesis-shaped. It’s just that four years seems like an awfully long time, and it’s rather a shock to find that it’s almost at an end and I’m only two months away from having to hand in something that could ultimately define my future career. It’s certainly alarming to think that I could (potentially) be a fully-fledged Doctor by the end of the year. Still, being so close to The End has made me start thinking about what I want to do after I slap The Thesis down on the examiner’s desk and hence cease to be a full-time slave to its corruption. I’ve therefore formed a “Post-Thesis Bucket List™” of things I’d like to do (or hobbies I’d like to get back into) once this damned Thesis is completely done and polished. Because posting a bunch of whole life-slash-career ambitions would be intensely dull, these are just a bunch of short-term goals and ambitions that I’d like to fulfil once I’m back to being something resembling a normal human being. I’m talking FUN STUFF and achievable things and whatnot; not just a list of “I WANT TO GO SWIMMING WITH DOLPHINS HURR” stuff that everyone wants to do but probably won’t ever get round to. Incidentally, I may not actually get round to doing some (or any) of these, but it’s good to at least have plans.

I guess the list is hardly world-changing, but is really just intended to redress a balance that I feel has long been a problem during my PhD; the complete lack of motivation or energy to do anything that’s not just research or sleep. I look forward to being able to take weekends off, or go home of an evening without have an overclocking brain still ticking over with my PhD problems & issues and far too tired to think about or doing anything remotely hobby-ish. Largely, my sole hobby during my PhD research has been video games and cosplay-making, but it’d be nice to once again broaden my interests when I’m rid of the sapping effect academic research tends to have on time, motivation and energy, and the prospect of actually cross the finishing line very soon is genuinely thrilling; though, at the same time, completely terrifying. I can see the chequered flag now, and I just need to #KEEPPUSHING. 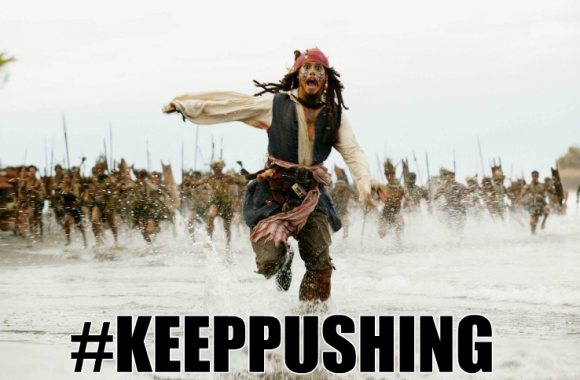 So how close am I to finishing? Well, I’m currently on Draft 1.2 of The Thesis, and it’s done the rounds of my supervisor (who didn’t immediately do a facepalm, which must be considered progress of sorts) and I’m spending time addressing his comments and rounding up some of the sections of work I still need to finish the work for and write up. For a good, long time (up to around a few months ago) it felt like The Thesis wasn’t progressing at all; I’d open it up at the start of the week and close it down on a Friday afternoon with little visible progress. Within the last few months, though, the document has certainly been growing in leaps and bounds: the main text (ignoring the preamble and postamble, references, etc.) is 142 pages and 40, 000 words; 184 pages it total, plus 28 further pages of appendix. As it stands, I’m fairly optimistic that I’ll have something that at least looks like it might be a competent piece of work; even if it turns out that the examiner doesn’t agree with me. Either way, I suppose that there’s no going back now, so if it turns out to be a monumental failure then at least they can’t make me go back to the start and do it all over again, so it’s the final stretch for me.

It’s a little difficult to see how far I’ve come over the last four years, primarily because (as it turns out) four years is a fucking long time. It’s always been difficult to keep the whole thing in focus, purely because of the sheer scale of the endeavour and that it’s such a heavy beast. But now, when I’m in the throes of wrapping everything, trying to tie up loose ends and attempting to patch up those gaping holes, things are starting to come together and it’s the fruits of my labour are beginning to be reflected in The Thesis. It’s by no means a perfect document nor an accurate reflection of all of the trials and tribulations that I’ve hammered through in the previous four years, but it does form the basis for demonstrating that I’m a stronger person with experience of trying to push through tricky research, often in the the face of adversity or technical/theoretical difficulties; at least, I hope it does. I guess I won’t know for sure until at least the end of the year, but either way, the hand-in day itself will be a major milestone, and received with much celebration. ‘Til then though, I’d best crack on. Geronimo. 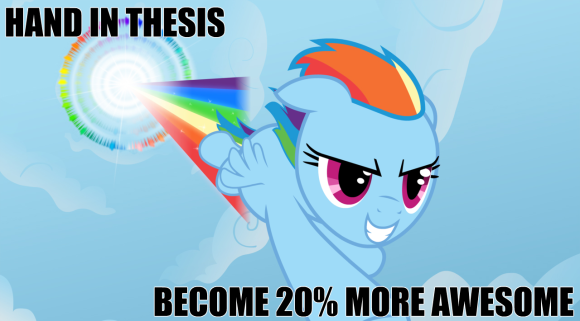