There’s a tendency, these days, for personal development and constant embetterment to be seen as the primary goal in life; that one’s sole purpose for existing should be to make oneself better in every way, to achieve higher and higher goals. We’re seemingly taught, from a young age, that we need to be successful, to prove that we’re special and that we can change the world if we just try hard enough. We’re pushed through school, then college, pushed to achieve only the best; and more and more young people are being funnelled into university and further education to continue this theme. We’re discouraged from ‘wasting’ our time watching TV, playing video games or spending hours glued to the internet watching videos of cats. And yet, this seems to be the natural habitat of your regular, everyday grad student:

Jorge Cham, author of the venerable PhD Comics, has built up a solid reputation in public speaking through his entertaining seminar ‘The Power of Procrastination’, which I lapped up when he visited our University earlier this year. In it, he discusses the concept that thinking about “something else” through is actually beneficial for our brains, and certainly for our PhD studies. In other words, taking a break from your work to procrastinate is A Good Thing; or at the very least, not a Bad Thing. The key is in managing the procrastination such that it doesn’t become the ‘main event’ such that you don’t actually get anything done. I’ve certainly been procrastinating a heckload in between giving man-birth to 50,000-odd words in The Thesis, and I would probably get it finished a heckload sooner if I’d spent all that time avoiding silly things on the internet, playing video games and writing blogs (such as this one) – the thing is, if I had done that, then I’d probably have burnt myself out a lot harder and a lot longer ago, and I probably wouldn’t have been able to retain my PhD sanity this far into my research. I’m often at my most relaxed when I’m engrossed in the world of music, or hammering away at a video game like Gran Turismo 4 or F1 2011; concentrating only on the racing line, forgetting about all my other worries and only thinking as far ahead as the next apex. This is something I affectionately like to call ‘Senna Mode’: 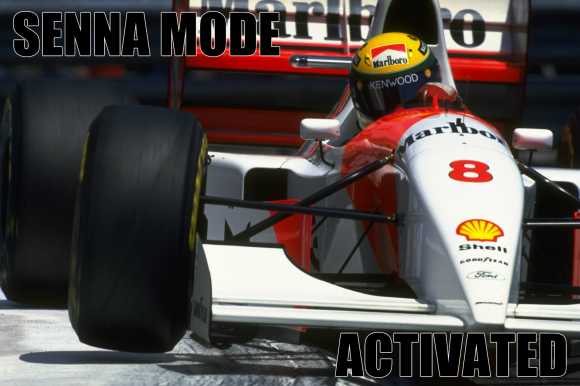 It’s crucial to find an equal balance between your research and your mental health; often, procrastination gives our resident brain time to relax back into a tolerant state of affairs. More often and not, then, procrastination takes the form of an activity we’d rather be doing than what we actually have to do. We’re more likely to do something ‘fun’ in our procrastination time (read the internet, play in the sunshine, watch endless re-runs of Judge Judy on television) than ‘productive’ procrastination (sorting out files and folders, hoovering the office, writing passive-aggressive emails to the faculty telling people not to steal your milk). It’s important to schedule in time to properly procrastinate and relax, as sometimes the best solutions to difficult questions pop into your brain when it’s least expecting it. We’re always taught that structuring short periods of ‘downtime’ – taking a breath in the middle of the day, or actually spending a lunch hour away from the desk, and not feeling bad about it – has a positive effect on productivity but in practice, there’s an ethereal pressure to just keep going and ignore the fact that you need to have structure ‘break’ times.

Certainly amongst fellow academics and students, there’s a widespread feeling that we should be doing research every hour of the day, and that we should feel guilty if we’re doing something other than diligently working on our research projects. I don’t know about you, but I need my time off in order to let my brain recover, and churn over difficult problems in my subconscious. With research, we often feel like what we’re doing is the most important thing ever and much of our procrastination arises from a fear of doing things wrong or that everything we’ve done before has been seriously flawed. Of course, Your Mileage May Vary, but most of the time it’s my lack of confidence in myself and my work that causes me to constantly fret that my superiors will suddenly discover that I’m a complete fraud at this research business; and as an escape, I typically retreat to the bowels of the internet to avoid work until I have the confidence to get into gear again. Because it’s relevant (and because it’s awesome), here’s a picture from almost the dawn of the internet which proves my point:

Cartoon by Asher Sarlin from Elephantitis of the Mind:
http://www.ashersarlin.com/archives/2004/09/honestly_who_co.php

Ironically for an information medium that now means everyone has the ability to download a bunch of high-class journal papers or get in touch with researchers on the other side of the globe, the internet is typically the bane of research these days; or at the very least, the bane of research students, as the strip from PhD Comics shown at the top of this page can clearly attest to. I tend to get absorbed in the internet when I should be working, and hopelessly worried about my research when I should be letting my hair down. Sometimes, I just can’t disengage from distraction, and remain hopelessly addicted to checking Twitter every half an hour or spending ages picking songs for a ‘TIME TO WORK HARD’ playlist on Spotify and then only getting about halfway through before it’s getting dark and time to go home.

The conclusion of this post, therefore, is a call-to-arms to put productive procrastination into practice; to work hard when I should be working, and to party hard when I’m allowed to loosen up. So, my new goal, therefore, is to apply ‘Senna Mode’ to my work – to only focus on the task at hand, and to think only about the current problem and not the plethora of other problems that plague me – and ‘Andrew W.K. Mode‘ to my playtime. When it’s time to party, we will party hard. 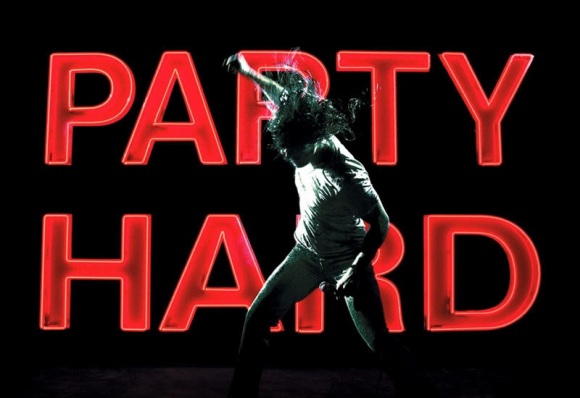