As has been proved empirically, I could watch/listen to Stewart Lee doing stand-up comedy indefinitely until the end of time. Alarmingly, it’s gotten to the stage that just being in the same aura as Stew is enough to send me into the giggles – so in tune, am I, with the essence of the character of Stewart Lee and his many grumbles and gripes, that I can see his ‘take’ on the real world even when he’s not there. It’s observational comedy, but filtered through the kind of bitter, warped mind that engages with my own bitter, warped mind on a primordial level. For me, his material is progressive; it grows with age, like a Pink Floyd record that improves with every listen and reveals more facets of ‘funny’ in a way that – in Chris Morris’ own words in Stewart Lee’s Comedy Vehicle series three – “knowingly operates the levers that make people laugh [by using any means possible apart from actually saying anything funny].”`

Such is his grip on the very essence of what tickles my brain’s funny nerve, I think of it as a Good Thing™ that even passing reference to Stew’s material helps to brighten everyday life immeasurably; breaking me into giggles and making me – at least temporarily – forget the darker clouds in the world. To be fair, this very fact is probably why I deploy comedy/movie reference with a machine-gun frequency, since it helps me to make light of the world’s troubles and to briefly shine some sunlight into the gloomier corners. Just thinking about crisps, or toilet books, or visible otters makes normal life minutely more enjoyable, and I wouldn’t have it any other way.

I’m incredibly excited about that fact that, in January 2016, I’ll be seeing Stew for the third time; at the South Bank Centre for a special gig where he’ll perform – back to back – all six episodes of the upcoming (or, will be) Stewart Lee’s Comedy Vehicle series four. I still think that his Caffé Nero routine from If You Prefer a Milder Comedian, Please Ask for One is one of his best, helped by the genius audience engagement over the forged loyalty card.

Naturally, for every side of the coin there must be a counter-side; for every Stewart Lee, there must be a Richard Herring. For me, Richard Herring’s Leicester Square Theatre Podcast (or as all the cool kids are calling it, Ruh-Heh-Less-Tuh-Puh) has been a bit of a revelation; tapping into my utter comedy geekdom of hearing many of my Brit comedy heroes interviewed about whether they would prefer an armpit that dispensed suncream or a hand made of ham, and whether they’ve ever seen a bigfoot. Part of the attraction, for me, is hearing comedians just talking; not delivering material on purpose or trying too hard to be funny, just talking.

I’ve been genuinely charmed by the ongoing drama of the “who broke the cupboards in the Edinburgh Fringe 2002 flat?”; the story of how Stew once wanked off Richard with a 100-year old ventriloquist’s dummy; or Rich’s continuing descent into insanity through the medium of playing snooker against himself in his basement and recording it for the internet (Me1 vs. Me2 Snooker). Also, I PAID A POUND: 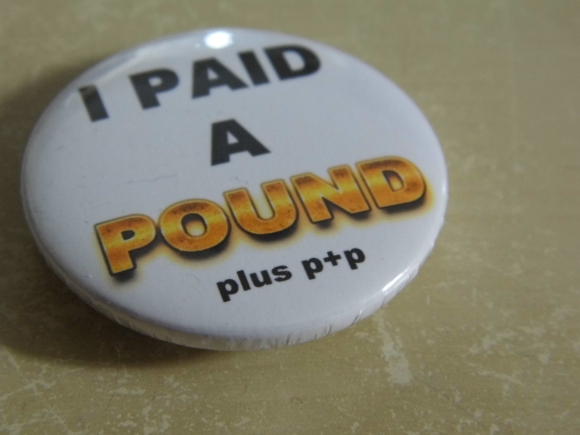 Part of this Lee and Herring adventure was inspired by the discovery of magic of Fist of Fun; Rich and Stew’s first TV show from 1995. The characters of Richard Herring (“…and I am called Richard Herring”) and Stewart Lee (“No, not ‘ahh’ “) work so well, and so many more of my favourite Britcom heroes [Rebecca Front, Kevin Eldon, Al Murray, Peter Baynham, Alistair MacGowan] that it can hardly fail to impress. After having watched the entireity of Series One at a friends’ house over the course of a single evening, I found an almost mechanical response to order myself the box-set of both series before my brain had even registered that anything had happened. I’m yet to even plunder the delights of S2 given that I’ve been 100% absorbed in going back through S1, trying to catch all the background jokes and going through all of the “slow-mo” bits to harvest the comedy gold held within.

[ And while we’re on the topic of classic Britcom shows that I’m only just getting round to catching up with, I also watched recently – for the first time ever – Knowing Me, Knowing You with Alan Partridge. I’m not sure how I’ve really escaped watching it until now, given how much I’m in love with everything AGP has done since I’m Alan Partridge, but it’s reassuring to know that I’ve finally corrected this heinous error. ]

Thinking about it, despite my proclamation in the opening paragraph that everything is Stewart Lee’s fault, upon reflection I think that it’s probably Armando Iannucci that is to blame for most of my Britcom geekdom. With an absolutely flawless record, I adore everything that he’s worked on and everyone he’s worked with: Steve Coogan, Chris Morris, Lee & Herring, Jesse Armstrong, Graham Linehan; I’m Alan Partridge, The Thick of It, Time Trumpet, yada yada yada. He’s just an incredibly perceptive, switched-on satirist that seems to just be able to tap into pure comedy and write exceptionally funny situations and characters and surround himself with talented writers, actors and producers with a similar sense for funny. I’m still yet to catch up on his most recent project (Veep; weaving a The Thick of It-kind of comedy across the Atlantic into the Vice-President’s office of The White House), which extrapolates away from very British comedy and into the deep, dark wilds of the US, but I’m led to believe that it’s easily up to his dazzlingly high standards.

So yeah, you can blame Stewart Lee, Richard Herring and Armando Iannucci for my recent habit of breaking out into giggles at the slightest drop of a hat. But if comedy is an addiction, then you can keep your cold turkey; I’m sticking to the hard stuff.