Genre: Point-and-Click Adventure
Platform: PC (version tested), Mac
Release Date: October 2014 remake
Developer: Pinkerton Road Studios
Publisher: Phoenix Online Studios
I missed Gabriel Knight: Sins of the Fathers (GKSotF) the first time around. Y’see, I was always a LucasArts brand of adventure-hound rather than a Sierra one; craving the comedy adventures in the vein of Monkey Island, Grim Fandango and Full Throttle (along with other, non-LucasArts games like Simon the Sorceror and Broken Sword) rather than more serious titles, like Gabriel Knight. However, since 2014 marked the twentieth anniversary of GKSotF’s release and saw release of an anniversary remake by Pinkerton Road Studios, the time seemed as good as any to leap into the world of Gabriel Knight and his roguish brand of amateur crime-solving.

Jane Jensen’s Gabriel Knight series still remains a heralded classic in the point-and-click canon, touching upon a tale of murder-mystery stuffed with conspiratorial happenings, secret voodoo cults and suspicious events. The titular Mr. Knight is a brash, book shop-owning novelist from New Orleans, who becomes increasingly involved in police investigation of a case known as the Voodoo Murders through his friend Detective Moseley, before getting in far over his head. Over the course of ten game-days, the player must manoeuvre Knight around various scenes and locales of New Orleans (and, later, Germany and Africa); examining objects, harassing the townsfolk and using objects with other objects in the time-honoured point-and-click fashion. However, what sets GKSotF aside from the average is Jensen’s superb narrative: where my childhood adventuring through the LucasArts catalogue mainly stroked the soft underbelly of light-hearted storylines and comedic set-pieces, GKSotF tackles far more dense subject matter; a true crime thriller, with its fair share of grisly crimes and decidedly ‘grown-up’ themes. It’s reminiscent of a page-turning detective novel, with some excellent story pacing and an array of suspicious characters all, inevitably, involved in a complex web of mystery that maintains a respectable level of tension throughout the experience.

A key part of maintaining this atmosphere lies in the engaging, well-balanced, puzzle design. While some puzzles will have you scratching head for a while, they rarely feel unsolvable; yet, never facile, either. Solutions are never made too obvious (nor is the player ever steered toward them using petty hand-holding), yet pose a median level of difficulty that don’t challenge either the player’s intelligence or stupidity. Furthermore, the puzzles all maintain relevance to the ongoing storyline and police/spiritual investigation, meaning that the game largely doesn’t feel padded out with extraneous hoop-jumping or completely bizarre, shoehorned puzzles. To my knowledge, there was only one occasion where I hit a puzzle that I would never, ever have solved without the hint system (spoilers: it was the exact wording for what I was supposed to write on the tomb wall in the voodoo code) and, of course, the ‘engage with the mime’ puzzle near the beginning of the game is possibly the most tedious puzzle that I’ve ever encountered in an adventure game, but we all make mistakes.

GKSotF should also be commended for not relying too much on the adventure games staple of constant back-and-forth between characters or scenes to progress the action; not that engagement with NPCs feels too much like a chore. Aside from the game’s abrasive voiced narration (which, thankfully, it is possible to mute), voice acting varies from ‘really good’ to merely just ‘acceptable’, and the initially-tedious dialogue animations certainly endear and lose their irritation. Dialogue trees are also well-constructed to avoid too much repetition and deliver the ongoing narrative in a focused, natural way. In this respect, the presence of a physical narrator of Gabriel’s actions feels like an alien concept (at least when compared to the LucasArts style of having the main character comment, narrate and break the fourth wall) since it disengages the player from Gabriel himself, but adds to the feeling of being involved in a detective serial or TV movie. Pretty much all of the dialogue, scenery and storyline are – I’m led to believe – faithfully recreated from the 1993 original version of Gabriel Knight: Sins of the Fathers (except now rendered in prettier high-definition graphics and cut-scenes) and it’s satisfying to find that GKSotF has aged commendably in the intervening two decades.

In general, the updated character models are well-rendered; faithfully-recreated scenes are packed with prettiness to look at and it all represents a fairly solid modern take on Gabriel Knight: Sins of the Fathers. If there’s a weakness in the visual and atmospheric update, it’s in the game engine – the commitment to re-drawing scenes from the original leads to the limiting decision to use high-definition, 2D backgrounds with 3-D Unity-driven character models walking overtop, rather than fully-3D scenes. 99% of the time this raises no issues, but occasionally presents unfortunate graphical glitches and evidence that the gameworld is merely a 2D plane with characters pacing around atop a stationary texture. It’s not a game-breaker, but merely leads you to occasionally feel like you’re playing an adventure game version of The Sims.

[FYI, if you want to get hold of the original version of GKSotF, then head over to GOG.com] 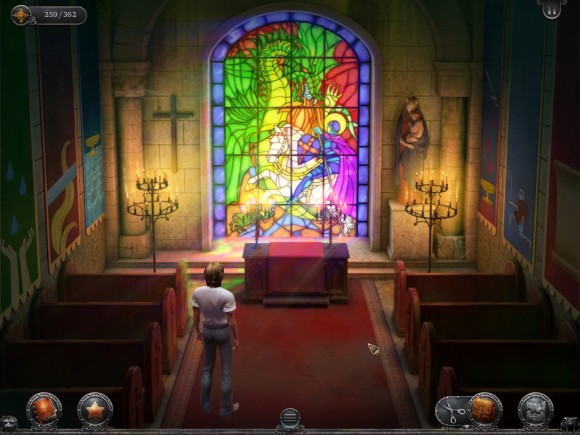 But, I’m nitpicking: the fact that you notice such mild gremlins and glitches is simply because the rest of GKSotF is so solid and enjoyable. Sure, the storyline drifts off a little in the last third – away from the more interesting ‘police’-type investigation and toward a more linear path of “do this, then do this, then do this”, which feels just a teeny bit padded out – but it’s because the majority of the game feels so well-paced and –balanced in terms of both narrative and gameplay.

In truth, I was expecting to be a little disappointed by Gabriel Knight: Sins of the Fathers. My curiosity had been piqued by Yahztee & Gabe’s playthrough of the first hour or so on Let’s Drown Out, and I’d expected to be mildly engaged by the storyline but to find fault with the game’s mechanics and object/NPC interaction. Imagine my pleasant surprise, then, to discover that it’s one of the best adventure games that I’ve played in recent years. Despite a few flaws, it’s still a masterclass in adventure game design and well worth a visit for the narrative exposition alone. Perhaps it’s testament to the forward-thinking innovation of the original, or the persistence of the point-and-click genre in being stuck in the mid-Nineties, but if ever there were a time to discover the world of Gabriel Knight (or perhaps just revisit it), then it’s now.