Last week, I kicked off a delightful yuletide journey to separate the undead from the FUNdead of the current crop of Nazi Zombie movies with the opening statement: Reich of the Living Dead: Part One.

Naturally, there are more movies to cover in the future and (no doubt) more entries to spring forth in future but, to wrap up this festive miracle, I hereby lay forth the concluding, second part of this mini pop-culture quest.

Merry Christmas, one and all!

My goodness, Outpost certainly makes you crave a bit of colour on your screen.

Predominantly painted in the dreary hues of bunker grey, mud brown and camouflage green, Outpost sets out to bring a little bit of grit to Nazi zombie genre; propelling a group of mercenaries – escorting a stoic and chiselled British spelunker – towards an abandoned East European bunker-like outpost in search of…something (to be determined). When the unsubtly-multinational team stumble across a whole host of paranormal hooley blowing around them, it soon appears that the site was once an SS military research facility attempting to bend space, time and immortality. Well, bugger.

This premise kicks off a rather military-flavoured action-horror crusade, pinning man vs. immortal in a way which manages to keep things deeply mystical and shrouded rather than explosive or, say, interesting. Whilst the cinematography, acting and dialogue is of a high quality, there is an undoubted vacuum of charismata in both pro- and antagonists: indeed, the biggest villain – the chilling Brigadeführer Götz – is woefully underutilised and painfully lifeless. But hey, maybe that’s the point.

Whilst, in the main, Outpost does manage to avoid treading on the same old Nazi zombie tropes, it falls over in its rather rigid adherence to the action-movie header without ever fully embracing the obvious paranormal parallels; culminating in a growingly tedious siege-style set-piece polished off with a hammy finale. Indeed, it goes to show that once you drain all of the colour out of an engaging concept and paint over it with camouflage gear, butch mercenaries and 9 mm rounds, what’s left is something just a bit dreary.

Something that not even Tyres (Michael Smiley) from Spaced can brighten up.

Frankenstein’s Army, on the other hand, is spectacular.

Emerging from the rubble of director Richard Raaphorst’s previous project, Worst Case Scenario, comes a full-blown 80-minute found-footage film which gives even Dead Snow a run for its money as my favourite film on this entire list. Taking the concept of Nazi occult experimentation to its natural conclusion, the premise sees a Soviet reconnaissance team going deep into the Eastern Front to discover an undead legion of previously-human robotic Nazi homunculi with a whole manner of afflictions: scythes for hands, iron maidens for heads and giant pincers for hands, it’s all here.Wow.

Naturally, this leads to a whole bunch of rip-roaring action as the Russian team lurch from one dangerous situation to the next; each time, ramping up the dread as the peril escalates. The film’s style and theme is a perfect fit for the “found-footage” genre, and the cinematography is superbly worked to bring out the best in the style: indeed, Frankenstein’s Army represents probably my favourite of the sub-genre; rivalling even [.REC] for vision and technique. The quality of acting and dialogue also matches the high-quality of visuals, and both creature- and set-design is absolutely top-notch.

There’s a super amount of ‘vision’ on display here, and a wonderful amount of joy in seeing a director left to build a fascinating and creative world without much in the way of creative restraint. Either way, and by a long shot, it’s the only movie I’ll watch this year that features a lumbering Nazi zombie with a rotating aeroplane propeller as a face. So that’s nice. 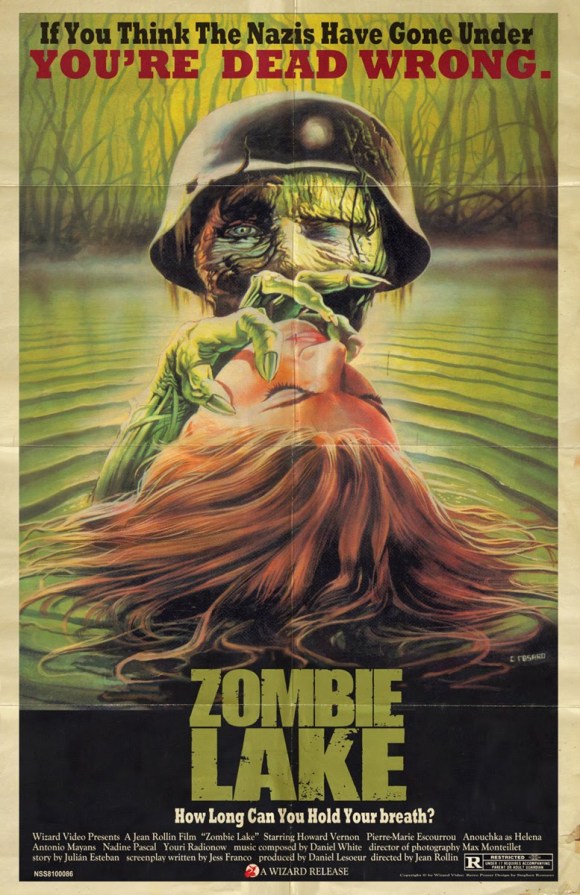 And from the sublime, we go to the ridiculous.

A little like the cursed body of water which forms its main backdrop, Zombie Lake truly scrapes the bottom of the Nazi zombie barrel. Sure, you’ve got to expect that anything emerging from the soft-focus nightmare of European cinema in the late 70s/early 80s hardly going to have dated well, but it’s almost as if they were trying to make it ostensibly sleazy.

Zombie Lake (also: Le Lac des Morts Vivants; this one’s French, innit) circulates around a damned lake which harbours a legion of undead Wehrmacht with a penchant for kidnapping young girls who skinny-dip in the lake; in one case, even a whole female basketball team. Bizarrely, salvation lies in a 10-year old girl, a demonic ceremony, and a flamethrower; naturally. While it purports to be a horror film drawing on the Nazi zombie schtick, there are times when it’s hard to diagnose it from softcore pornography: it starts off immediately with full-frontal nudity and lapses into it with alarming regularity.

Out of all the movies that I have persevered through whilst on this quest so far, this has been by far the biggest struggle. The acting is contagiously hammy, the plot mind-bogglingly clunky, and there’s an unbelievable amount of lingering, padding shots that equally lurch from one scene to another as if the film-cutter was attacking the cutting-room floor with a handful of secateurs. It tries to straddle the diverse pillars arthouse and grindhouse, but manages to fall catastrophically into the chasm in between; make sure you bring your crampons, because it’ll be a slippery journey. 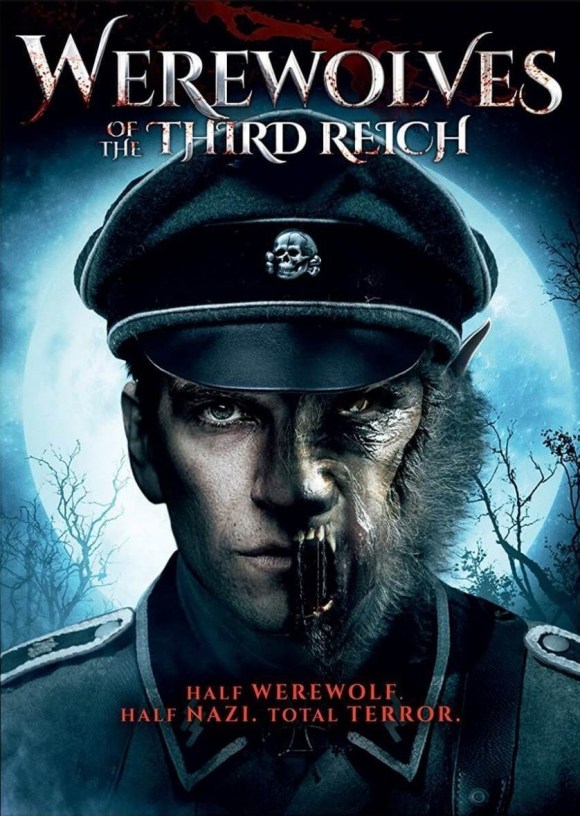 Ok, so I’ve bent the rules a little. But hey, werewolves are pretty much just hairier zombies, right?

Werewolves of the Third Reich (WotTR) emerged out of the fog during a visit to a local brick ‘n’ mortar entertainment store, and I took a punt. The premise is this: Josef Mengele – the notorious ‘Angel of Death’ who conducted a series of human experiments at Auschwitz – has, by some nefarious means (comprising an overlong and extremely over-acted interrogation scene between a German scientist and a couple of highly-camp SS officers), acquired a serum allowing the fusion of genetic material to create monstrous beasts. Thus, at a generic Nazi scientific facility called “Camp 7”, the plan, naturally, is to construct an invulnerable Nazi-Chimera supervillain from wolf and man (supernaturally).

Yet, bizarrely, WotTR reaches to reach almost two-thirds of its run-time before anything materialises: in which time we’ve stampeded through three chapters of padded-out exposition, an Adolf Hitler with Parkinson’s Disease and the least convincing swastika flag that I’ve ever seen on screen. When the aforementioned werewolves werewolf does turn up (to imply ‘plural’ would be gross misrepresentation), there’s literally no momentum behind the film; a vacuum of plot, punchlines and peril. It’s low-budget, but fails to live up to even the lowest expectations and provides little in the way of hook to draw the viewer in.

Still, there is some entertainment to be had from the top-quality German dialogue that appears that it was translated word-by-word using Google Translate; I guess one has to enjoy the kleine dinge, eh?

So, that brings things (as well as 2018) to something of a close. Sure, I’ve managed to pack in two, bumper posts just as the curtain falls on the year, but I’ve only just begun to scratch the surface of the genre; there’s still plenty of ground to cover.

With that in mind, you have my word that this journey will continue into 2019; until then, Happy New Year!